Humankind discovered coffee just around 500 years ago. From boiling weird green beans to an incredible variety of K-cups types of beans, our favorite drink has evolved in oh so many ways, and the evolution never stops. The hot new trend is called nitro coffee. Maybe you have already seen the posters in your gym or ads in your local coffee shops. And if you haven’t seen it yet, you will, I promise. Nitro coffee is taking the coffee world by storm. So, let’s jump on that bandwagon and learn everything there is about that new way to enjoy your coffee.

What Is Nitro Coffee

The hype started in the early 2010s in the USA. Usually, Cuvee Coffee and The Queens Kickshaw are considered to be the first places that served nitro coffee.

Nitro coffee is also known as NCB (Nitro Cold Brew). Simply, it’s a cold brew coffee infused with nitrogen gas. But why, you might ask? Nitrogen gas adds a unique flavor and a mouthful experience. This new way to enjoy your coffee has become even more popular since 2014. That was the year when some coffee companies mastered the art of canned nitro coffee. Nowadays, you can find nitro coffee everywhere, from Starbucks to your local gym.

As nitro coffee is your regular cold brew infused with some nitrogen, they share the same health benefits. But the main reason you should start your day with the cup of nitro joe lies in the new world of flavor. Imagine the fineness of a good, cold pint of dark stout with rich foam on the top.

The caffeine kick also adds to the benefits, so the gymgoers, students, and workers have found a new tasty way to stay sharp and awake.

How Does Nitro Coffee Work

Adding gasses into your beverages is not a new idea. Just ask any draft beer lover. However, unlike carbon dioxide, nitrogen is a bit harder to add to liquids. But the reward is higher, as the nitrogen bubbles are smaller than carbon dioxide ones, and they enhance the taste without ruining it with bitterness. Nitrogen enhances the texture and the flavor of the coffee, giving it a smooth, foamy finish. Imagine drinking a black coffee that has the taste and consistency as you already added cream and sugar.

Similar to beer, nitro coffee is usually served on tap in coffee shops and gyms. You need a professional dispenser to add pressurized nitrogen to the coffee, so premade nitro coffee is not an option. Some coffee companies mastered the process of canning the nitro coffee, but their secret is very well kept. But don’t worry, we will teach you how to make your own nitro coffee further in the article.

Pros and Cons of Nitro Coffee 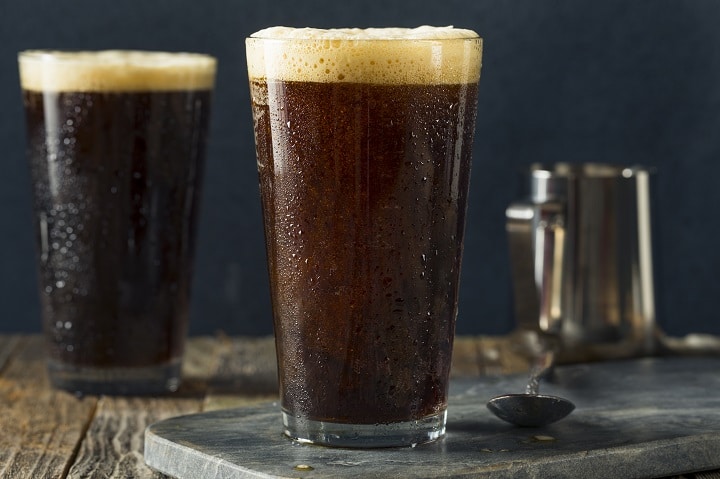 Nitro coffee has an unmatched creamy texture, thanks to nitro bubbles. The nitrogen transforms the usual cold brew into a frothy mouthful pleasure, and the overall experience can be compared to a draft beer experience. Nitrogen enhances the coffee texture the same way as milk frother adds creaminess to your coffee.

Our new best friend, the nitrogen gas, also adds a subtle sweet note to the coffee. This means you won’t be needing any sugar or sweetener in your cup of strong Vietnamese coffee. Cutting sugar intake is always good for health and weight loss. Also, it’s one of the main reasons the gyms started to offer nitro coffee to their respective customers.

Most of the coffee acids appear when you brew your cup of joe at higher temperatures, between 195 and 205 Fahrenheits. However, the base of the nitro coffee is cold brew, meaning it’s low on coffee acids. The coffee drinkers with a sensitive stomach will appreciate this. Just remember that level of acidity in coffee can vary, and it depends on the type of beans, roast level,  and the way you prepare your cup of joe.

As the nitro coffee is actually just a regular coffee with added nitro bubbles, the health benefits are the same. Our friends, the antioxidants are still here, s well as caffeine and the other micronutrients. And here is a handy list of all the good things coffee does to our body and our mind:

How to Make Nitro Coffee at Home 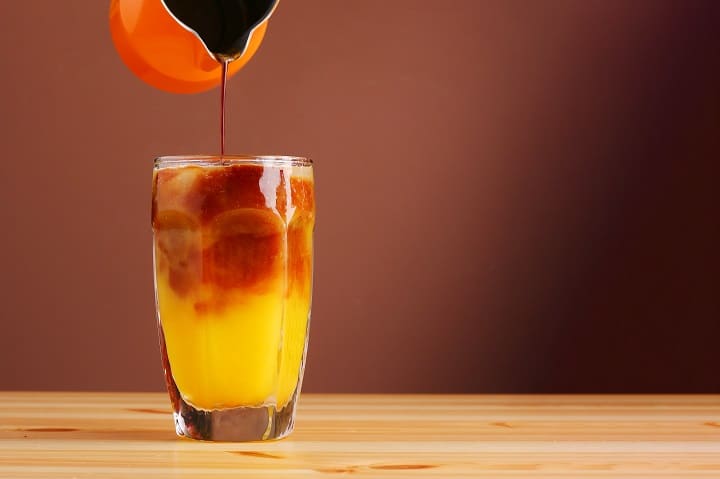 Like every trend, nitro coffee can be quite pricey. If you don’t want to pay five bucks every time you need your cup of coffee, we will show you how to make your own nitro coffee at home. You will need:

Step 1 – Get a cold brew coffee

If you are short on time, you can always buy a premade cold brew coffee from your neighborhood grocery store. But, making it yourself is better and more rewarding. Also, it’s much cheaper, and you can use your favorite type of beans, for instance, premium Ethiopian coffee.

Pour your cold brew coffee directly into your whipped cream dispenser. Put one nitrous oxide charge in its rightful place on the top of the dispenser. Discharge it, shake the dispenser a little bit, and turn it upside down.

Pour your homemade nitro coffee into a cold, tall glass. This way, you won’t have to add ice cubes into your coffee, as they tend to water down the taste. If you have guests coming around, put some espresso beans soaked in dark chocolate in a finger bowl. They are a great morning snack and go well with the nitro coffee.

Do’s and Don’ts With Nitro Coffee

Is nitro healthier than the usual black coffee?

Technically, black coffee and nitro coffee share the same benefits. However, the fact you don’t need to put milk or sugar in it makes nitro coffee a healthier choice. If you drink your regular black coffee without milk and sugar, nitro coffee won’t change anything besides the better taste.

Does nitro-infused coffee have alcohol?

No, it doesn’t, but we understand the misconception. Nitro coffee has a thick texture (like beer), is gas infused (like beer), and comes straight from the tap (sounds familiar?). But no, there is no alcohol in the nitro coffee, just coffee and some good old N2.

Do you put milk in the nitro cold brew?

One of the perks of the nitro coffee is that you don’t need any milk in it. However, if you just crave more milky taste, we say go for it. 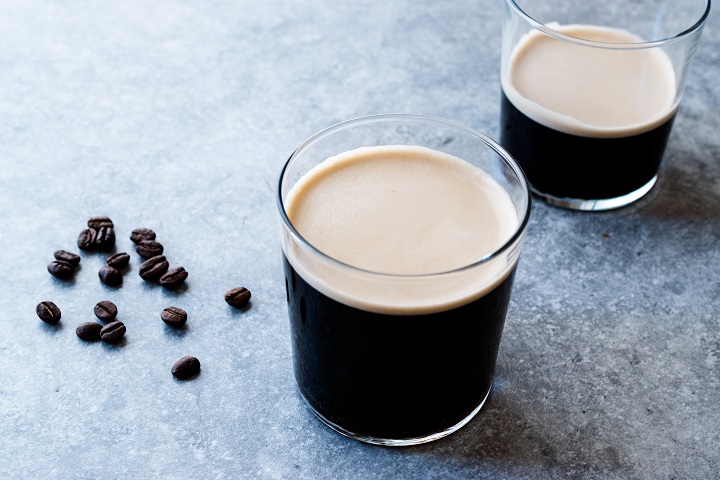 How much caffeine is in a nitro cold brew?

If you are a fan of Starbucks, well, we have some news for you. Their 16-ounce cup of nitro coffee has fascinating 280 mg of caffeine. And that is the sole reason you can’t get a larger cup of nitro coffee. And we didn’t make that up. We checked on the Starbucks official webpage.

Why is nitro cold brew so strong?

The base of the nitro coffee is our one and only cold brew coffee. When making cold brew, people have a bad habit of fixing the coffee-water ratio in favor of coffee. But even without playing with the mixture, your regular 16-ounce cup of cold brew will have around 200 mg of caffeine.

Where did nitro coffee start?

As with every other great invention, we have a few different stories.

The first story goes in favor of Mike McKim, owner of the Cuvee Coffee. In 2010, Mike was enjoying a cup of coffee in a different bar and saw a barista serving cold coffee out of the keg. Weird. Mike asked the owner for an explanation, and he liked it. In fact, he liked it so much that, in 2014,  he invented his new product: a kegged cold brew with a nitro charge.

There is even a third story that claims the first nitro coffee was brewed at The Queen Kickshaw, New York. And the truth is…it doesn’t matter. Thank you for your invention, whoever you are.

No, and there is a good reason for that. You see, when you add carbon dioxide to water, it forms a small amount of carbonic acid. Adding carbon dioxide into a coffee will result only in an awful taste and stomach problems.

Nitro coffee is the game-changer in the world of coffee devotees and a thing you absolutely have to try if you haven’t yet. My money goes on a prediction that nitro coffee will become more popular than mocha or cafe late. And, would you ever believe that you will drink sweet milky coffee, thick as beer, without any milk or sugar added? Weird, but possible.