Ok, so coffee is pretty much perfect the way it is. But sometimes, you want to mix things up a bit! Rather than loading your morning cup with sugar or blending it with cream and ice, why not try adding a little spice?

What Is Cinnamon Coffee

While it might sound strange, cinnamon is actually the bark of a particular type of tree. Most of us know cinnamon as a spice— the star ingredient of cinnamon rolls or sprinkled on donuts. But you can also add cinnamon to coffee, giving your cup of joe those warm, spicey vibes.

Benefits of Drinking Coffee With Cinnamon

There are loads of different ways of flavoring coffee— creamer, chocolate powder, or the world’s best coffee syrup— the list goes on. But most of these flavor options contain quite a lot of extra sugar, taking your coffee from a relatively healthy drink to a sweet treat fast. Cinnamon, on the other hand, contains practically none.

As well as being nearly sugar-free, cinnamon also contains loads of other things that give it its superfood status. It’s full of antioxidants with anti-inflammatory effects, lowers blood sugar, reduces blood pressure, and has anti-viral, anti-fungal, and antibacterial properties. Honestly, this is just a brief list of the many things cinnamon is known for.

Aside from the obvious health benefits, cinnamon is just plain tasty. It is an inexpensive way of flavoring your premium coffee beans.

How Does Cinnamon Coffee Work 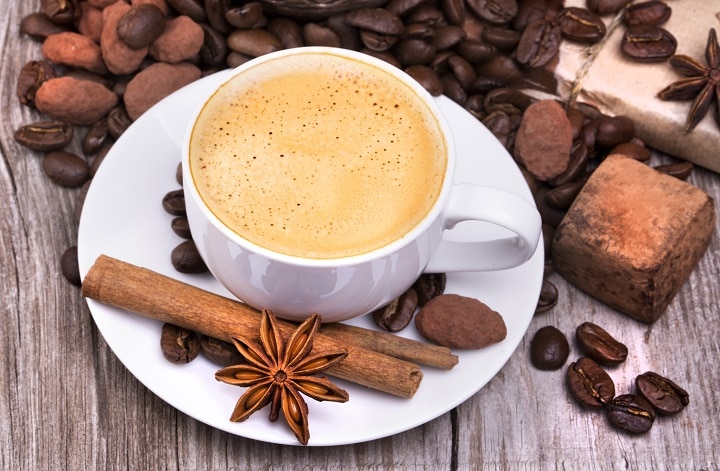 There are few ways you can go about making cinnamon coffee, all of which are actually super easy. You can use cinnamon powder, whole cinnamon sticks, or cinnamon syrup.

If you are brewing a cinnamon latte, try adding the cinnamon powder directly to the cold milk before steaming it. This way, the cinnamon will fully blend with the milk, ready for a latte.

The best option for black coffee drinkers is to add cinnamon powder to your coffee grinds in the brew basket. The coffee filter will collect any big chunks that aren’t dissolved, leaving you with a clean, cinnamon coffee. Coffee filters are a super important part of brewing gear and are really useful when making cinnamon coffee.

You could also try adding a whole cinnamon stick to your coffee drink. Not only is it a nice garnish, but it will add a heavenly aroma and spice to your coffee.

Pros and Cons of Adding Cinnamon to Coffee

Also known as ‘true cinnamon, Ceylon cinnamon is the more desirable of the two. It is tan-brown in color and has a delicate, mildly sweet flavor and aroma. Native to India and Sri Lanka, Ceylon cinnamon is quite expensive when compared to Cassia cinnamon.

Ways to Add Cinnamon to Coffee

Cinnamon as a Garnish

Add a sprinkle of cinnamon powder to the foam of a cappuccino, on the top of a latte, or to drinks topped with whipped cream.

Place a whole cinnamon stick in either a cup or a pot of coffee. The stick will slowly infuse with the coffee adding loads of aromatics.

Add a few cinnamon sticks into your bag of roasted coffee beans. The coffee will absorb some of that cinnamon goodness.

The perfect cup of mocha coffee uses powder, so why should cinnamon coffee be any different? Add cinnamon powder to your coffee creamer and mix it until the cinnamon is fully blended. 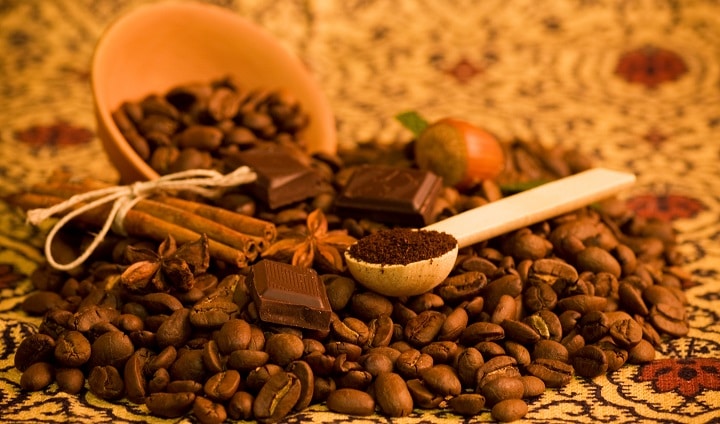 Use cinnamon syrup just like you would any other coffee syrup. Just a splash can change the taste of your cup completely.

Cinnamon to the Brew

Add cinnamon directly to the brew basket with your ground coffee.

How to Brew Cinnamon Coffee

There are so many different ways of making cinnamon coffee. Today, we’re going to look at an incredibly simple way that involves adding cinnamon powder directly to the coffee grounds in a drip coffee maker.

Step 1- Add your coffee and cinnamon

Add your ground coffee to the drip coffee maker, just as you would normally. Then add your desired amount of cinnamon powder. Try a teaspoon at first. If you like it, you can add more next time. Sprinkle it evenly over the coffee, then give the brew basket a shake to even out the bed of coffee.

Start the brew cycle and let the coffee brew as normal.

Stir the pot of coffee, then pour into a cup or sophisticated coffee mug. If you really love cinnamon, garnish the cup with a stick of cinnamon and enjoy!

The simplicity of a Keurig coffee maker makes it perfect for experimenting with different flavors. For every cup of coffee, try using around ¼ teaspoon of cinnamon.

Brewing coffee in a Moka pot produces a very rich, espresso-like coffee. Depending on the size of the Moka pot you are using, add between ¼ to 1 teaspoon of cinnamon powder to the coffee grounds.

The vibrant flavor of dark-roast coffee pairs perfectly with some ground cinnamon. Try a teaspoon of cinnamon powder sprinkled over the coffee in the filter basket of the drip coffee maker.

Try adding 2 teaspoons of cinnamon for every 100g of ground coffee used. This will make a tasty cold brew coffee with a good kick of cinnamon.

Do’s and Don’ts With Cinnamon Coffee

How much cinnamon do you put in coffee?

Use around ¼ teaspoon of cinnamon per cup of brewed coffee. For coffee with a strong natural flavor, try using a little more for the full cinnamon coffee experience. 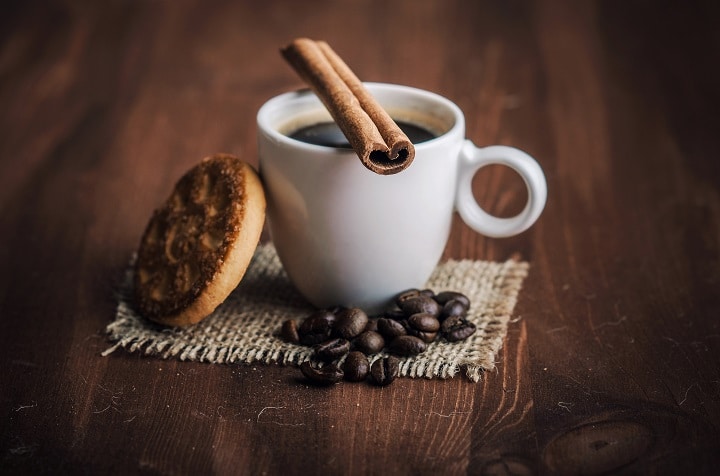 Can I mix cinnamon with coffee grounds?

Absolutely. Sprinkle cinnamon over the coffee grounds in the brew basket of your coffee maker.

Can you dissolve cinnamon in coffee?

Unfortunately, no. Because cinnamon powder contains insoluble fibers, it can’t be fully dissolved in water. Try adding the cinnamon to the ground coffee instead. This way, the insoluble fibers get trapped in the filter instead of your cup!

Can I add sugar to cinnamon syrup for coffee?

Sure, but you will need to heat the cinnamon syrup to dissolve the sugar fully. Don’t heat the syrup too hot, as it might burn.

Cinnamon can suppress your appetite and regulate blood sugar levels, both of which can help you lose weight. Cinnamon is also practically sugar-free, making it possibly the healthiest coffee flavoring there is!

Whether you want to lose weight or spice up your morning coffee, a little kick of cinnamon can do wonders. Cinnamon is tasty, aromatic, fairly inexpensive, and can be incorporated in pretty much any brew method you choose.